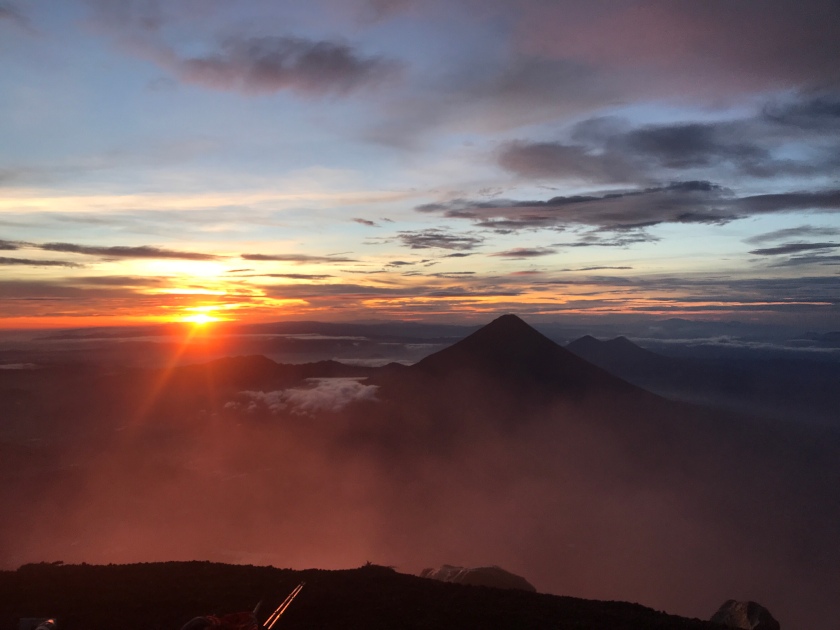 Guatemala, it has to be on your Central American bucket list. Home to diverse landscapes, traditionally dressed Maya, adventures, colonial elegance, natural beauty and historical ruins. It really has a lot to offer. A beautiful contrast between chaos and calm is what you’ll find as you weave your way through the country. Over half the population of Guatemala lies beneath the poverty line and there is no escaping this, especially when transiting from the major tourist hubs. But do not let this deter you! We flew into Guatemala City from San Jose, Costa Rica and that’s where our three week adventure began!

ANTIGUA / everything you read about Guatemala generally begins from the tourism hotspot of Antigua. Just under an hour from the airport of Guatemala City, most tourists make a B-line to the colonial town and skip the busier, chaotic, traffic ridden capital city. Ten US dollars in a shuttle and you have a door to door service from airport to your hostel in Antigua. Cobble stone streets, beautiful buildings, lush and cheap hostels and some of the best food options we’ve seen for a while. A place of beauty, major historical significance and vibrant culture. Mammoth volcano peaks surround the town, giving the former capital of Guatemala a picturesque and mystical vibe.

Antigua is a foodies heaven, especially after eight plus months of travel. You can dine well and inexpensively on pretty much anything you’re feeling like. Some of our favourite spots; Samsara, Toko Baru, Rainbow Café, Rincon Tipico and Saberico. There are so many other spots though. We generally chose the places with vegan and gluten free options. Similarly, lots of places to practice yoga, I visited Shakti Shala, a blissful start to a sunny morning.

Walking through the streets of Antigua is a must do activity, where you can appreciate the buildings, colours and Maya women dressed in traditional clothing. Three volcanoes impede over the town, Fuego, Agua and Acatenango. Fuego the most deadly of all. So why wouldn’t we pay some money to climb a volcano hey? In all seriousness, this was one of the best hikes of our trip. We chose to climb Acatenango, overlooking the dangerous Fuego, with an exhilarating summit. We set out from Antigua at 8:30am and drove for about an hour to begin our intense day of walking. Carrying warm clothes, food for the next two days and lots of water, we began the steep climb. After about four hours we reached the base camp. The view was mostly cloudy, so our guides decided not to summit for sunset. Instead, we layered up and sat by the fire, watching Fuego bust out puffs of grey smoke. Surreal is an understatement. Some basic pasta and red wine by the fire, followed by an early night into our tents. Alarms set for 3:45am, with a departure time of 4am to begin our summit. Steep, dark and unsteady ground for about an hour. We reached the summit just in time for one of the most spectacular sunrises of our trip. Fuego doing it’s smoking thing, encompassed by rich shades of warmth. We managed to spot lava spewing down Pacaya from the distance too. What a start to the day! So grateful for the opportunity to experience this slice of volcano heaven.

The descent felt like skiing down a dirt slope and was much much faster. We were back in Antigua town just before midday and spent the afternoon at one of our favourite hostels, Maya Papaya. A few days after, once my quad muscles had somewhat recovered, we spent half a day at Volcán Pacaya. Since Fuego erupted about three months ago, leaving thousands of locals killed and destroying entire villages, Pacaya has been more active. We were “lucky” enough to see lava slowly rolling down the volcanic slope. A quick glimpse of the lava and then the descent. I didn’t want to spend too long in awe of the lava, you never know what Mother Nature has in store…

We absolutely loved Antigua and found it extremely difficult to leave but it was time for a new destination.

LAGO DE ATITLAN / a place of mysterious beauty. Of volcanic origin, the lake is ringed by volcanoes and it’s shores studded with villages. It’s like a huge lush garden. Wherever you look, you see beauty.

The drive from Antigua to Panajchel, the most populated town of the lake, keeps you interested and intrigued, a real show of Guatemalan culture. Passing through towns and villages, off the tourist path, a taste of authentic Guatemalan lifestyle. Winding around the mountain terrain, spotting families farming together, children rushing out of the school gates, street food stalls, women carrying food on their heads, chicken buses busting at the seems, loco locals loaded onto the top of chicken buses, trucks packed with fresh produce and often people sleeping in the back of pick-ups, you often don’t know where to look.

From Panajchel, we took a water taxi to the vegan lovers town of San Marcos La Laguna. Whatever you’re into, it’s a great spot to kick back and distance the everyday world. We spent a few nights at Lush Atitlan and enjoyed the stunning breakfast and foliage covered buildings. A swim in the sparkling water at Cerro Tzankujil and a bite to eat at one of the many vegan or organic cafes is a summary of a typical day in San Marcos.

Following our days based in the town, we began three days of absolute zen at The Yoga Forest. The atmosphere of this place is pure tranquility. I felt like as soon as I walked in someone was whispering ’tranquila, tranquila amiga.’

I’d never done a yoga retreat before but I would totally recommend this place to anyone, even if you’re a yogi beginner. They don’t just help you destress; they also give you the chance to experience a whole new culture, hit the reset button on your perspective on life, detox your body with wholesome food and disconnect from tech. Each morning we’d start with thirty minutes of meditation and then 90 minutes of yoga. Followed by a wholesome, vegan and gluten free breakfast. The rest of the day was spent enjoying the most astounding views of the lake and the surrounding volcanoes. Whether you were taking a shower, using the compost toilet, playing cards on the sun deck, practicing yoga, eating a meal, sipping on fresh cinnamon and cocoa tea, whatever you were up to, you were surrounded by pure bliss and that indescribable panoramic spectacle. The afternoons consisted of another 90 minute yoga session, often meditating to the sounds of thunder or heavy rain. The prospect of living permanently in this sanctuary is tempting. So much so that it feels horrible to leave once your stay is over. We only stayed three days in this absolute haven but we totally could have stayed longer. If you’re in the area, go for the views, the food and the ultimate relaxation. 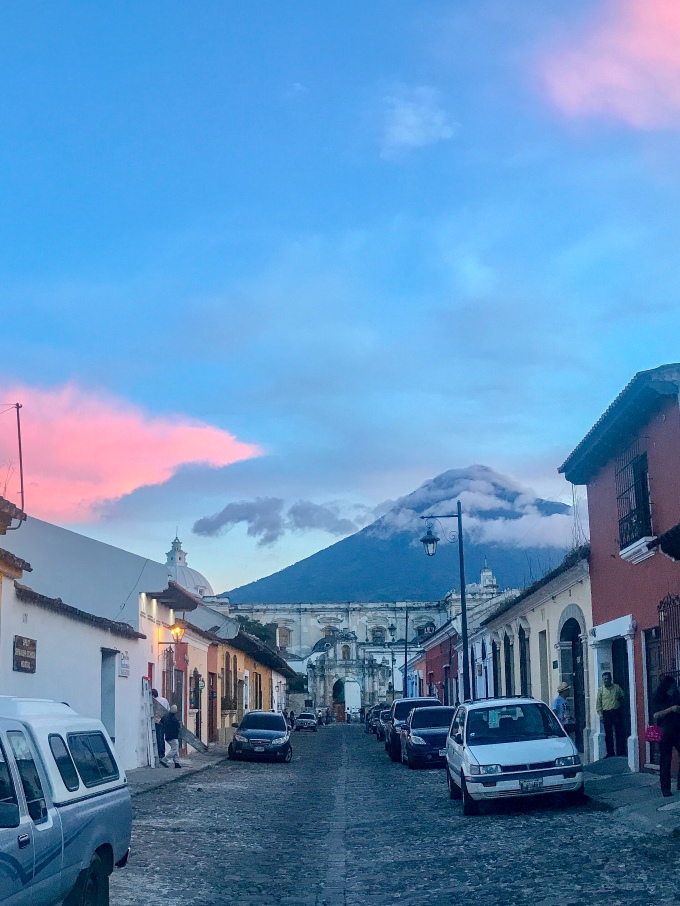 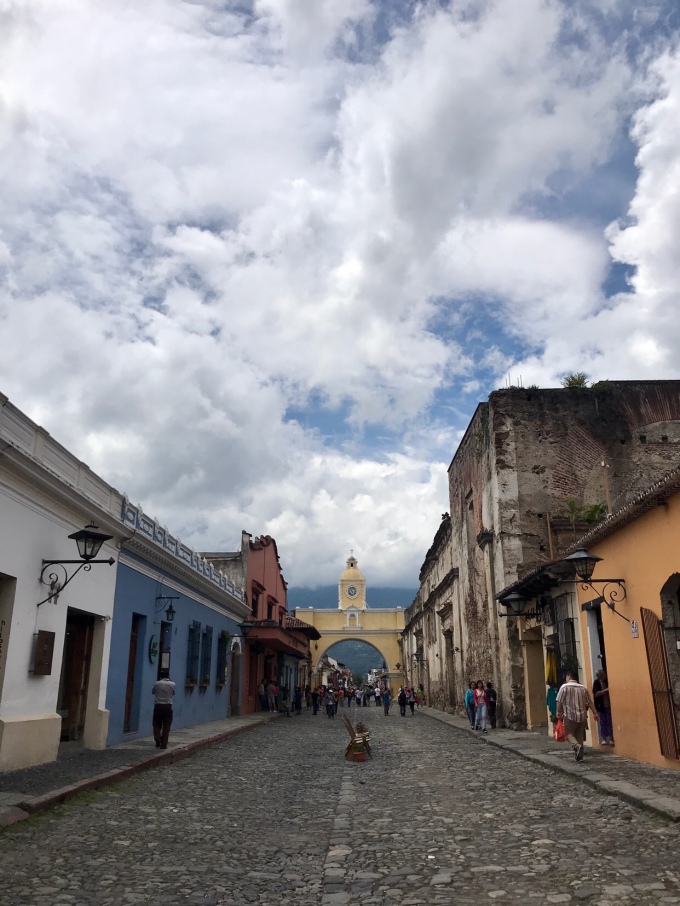 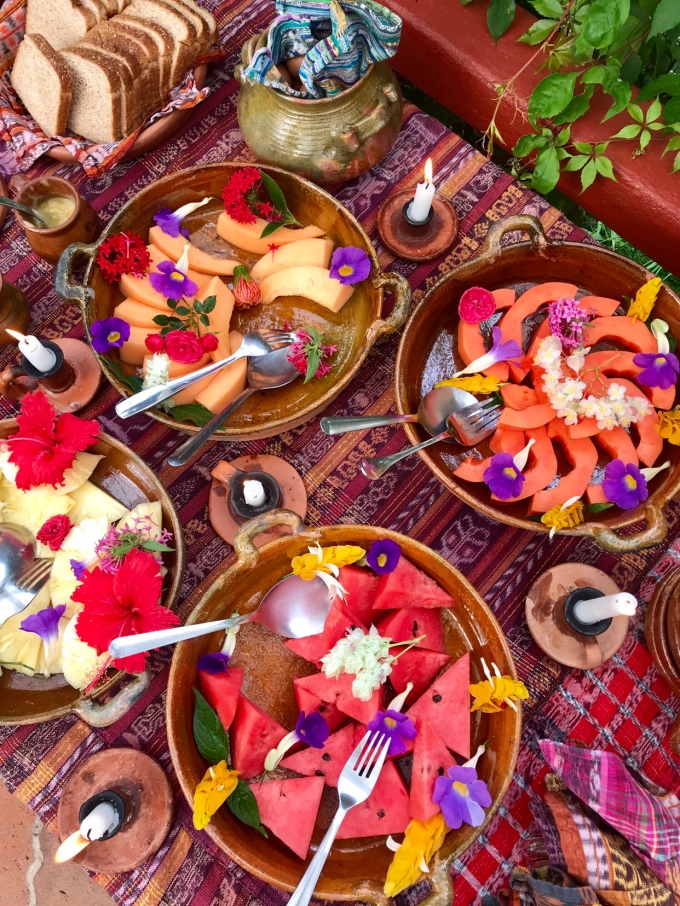 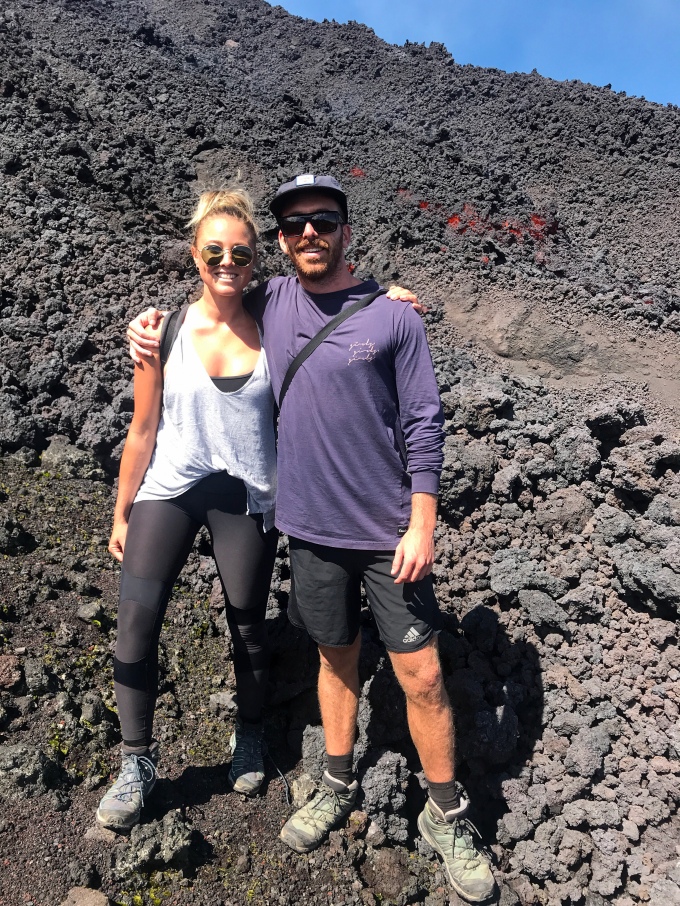 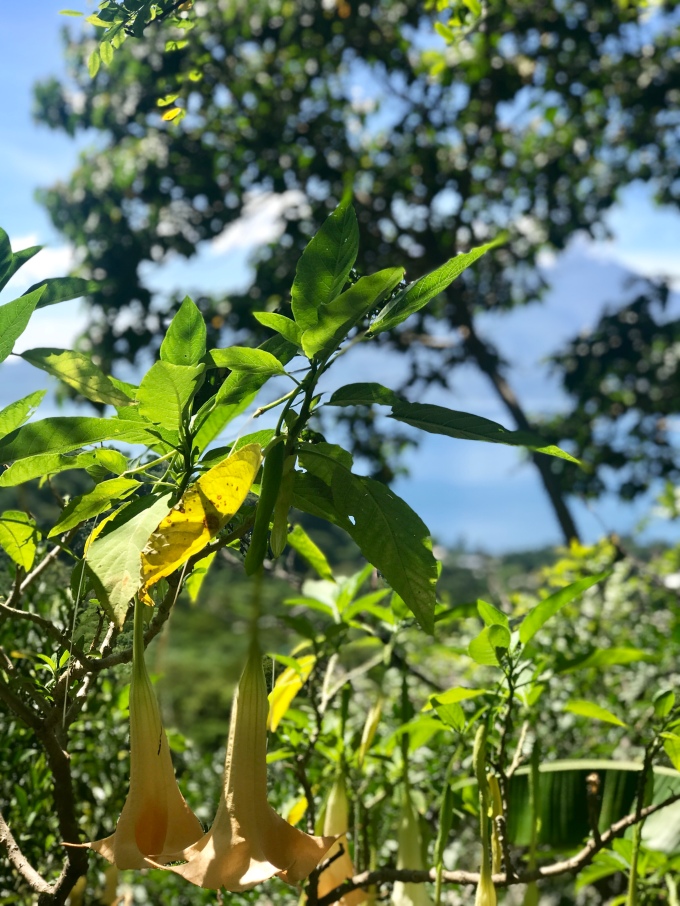 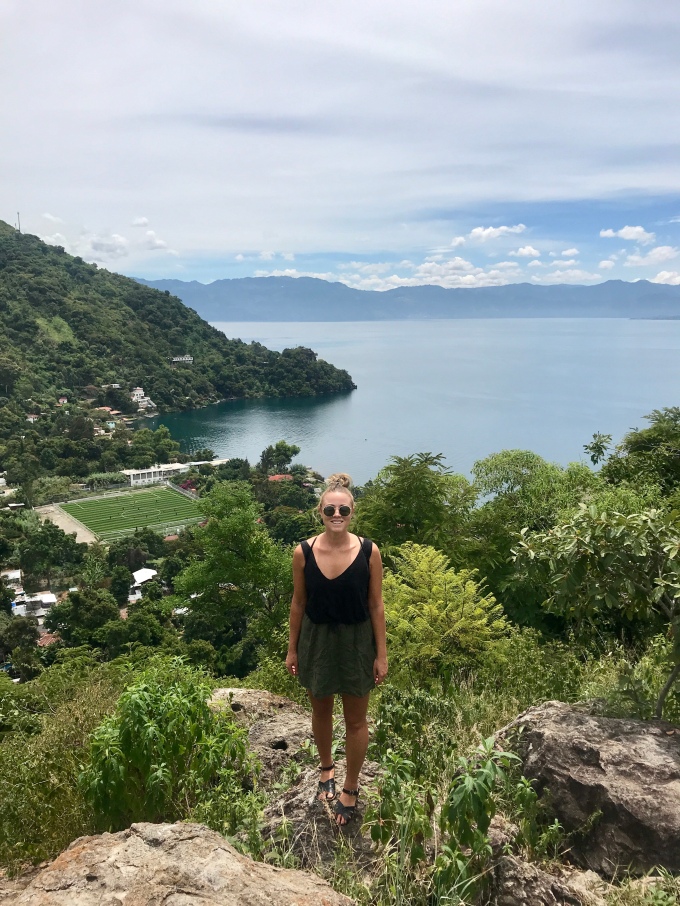 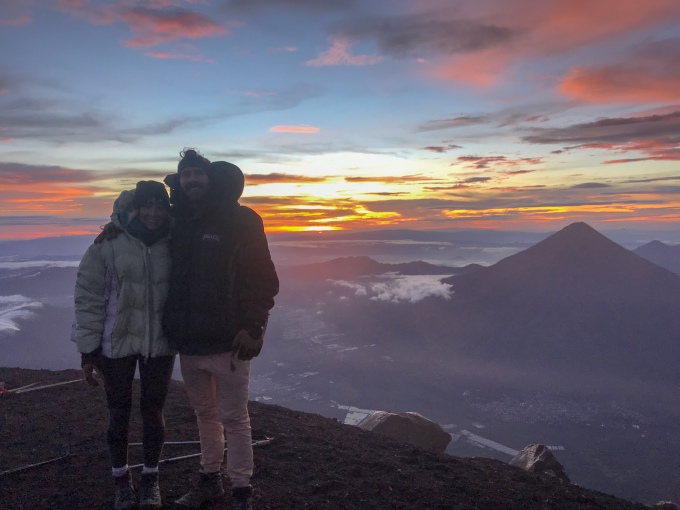 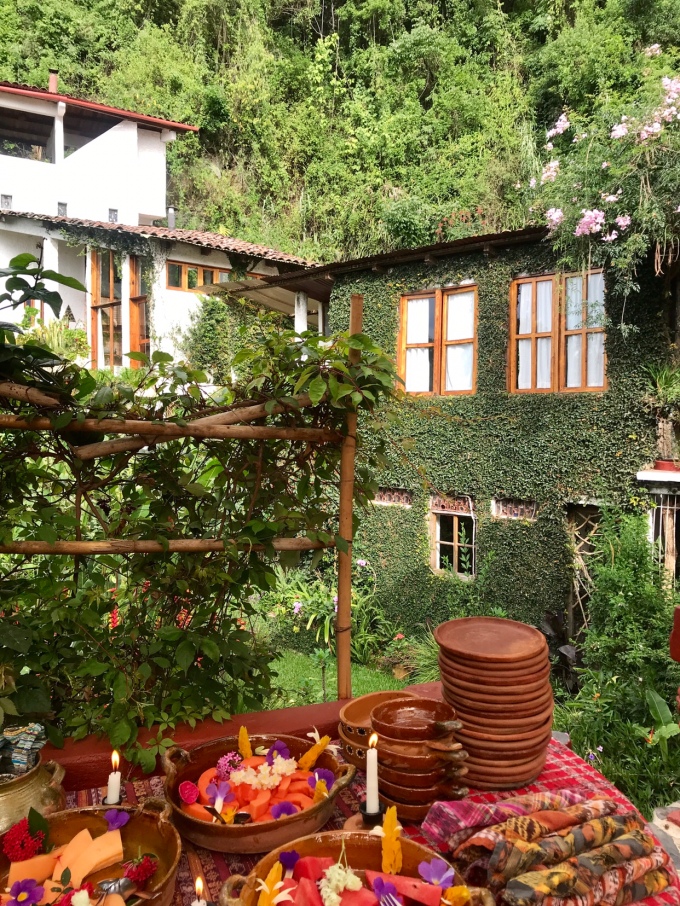 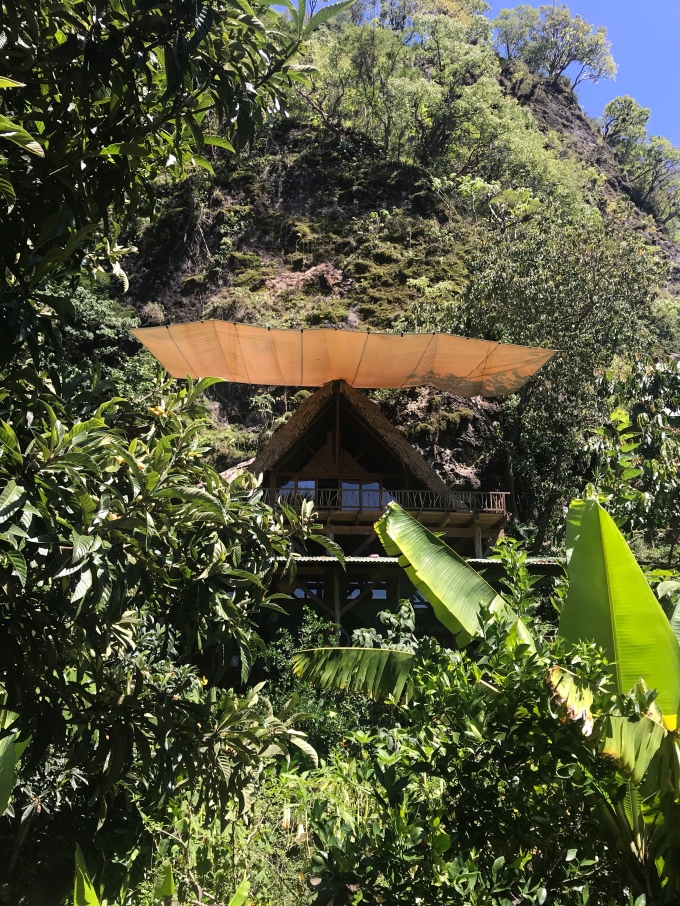 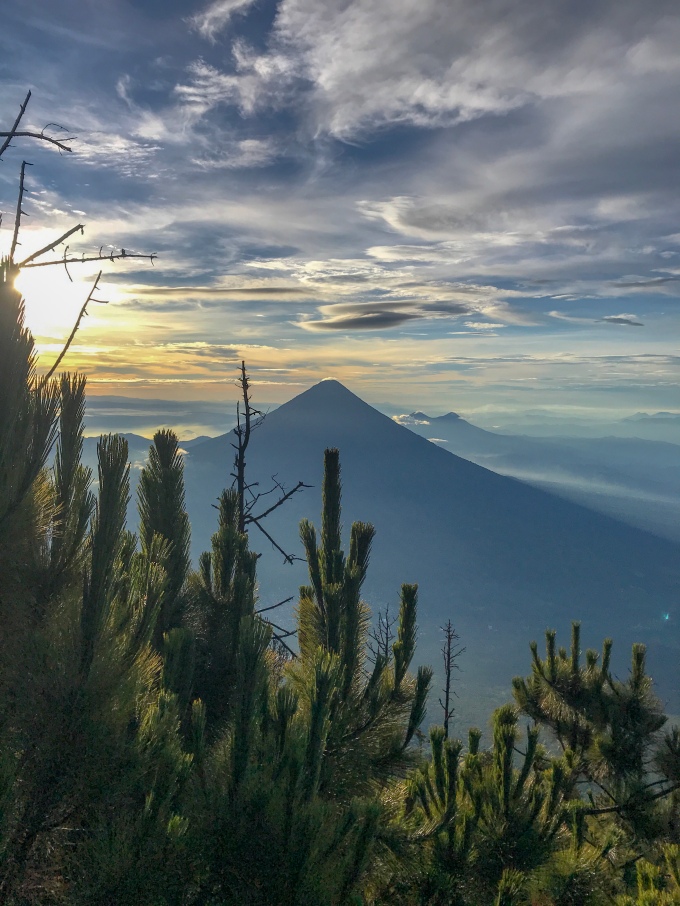 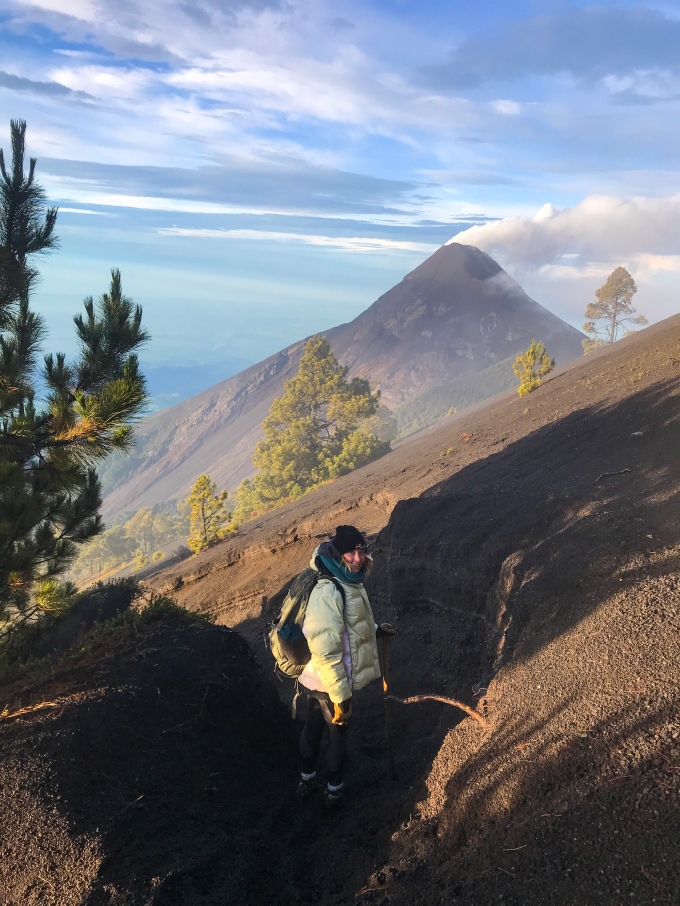 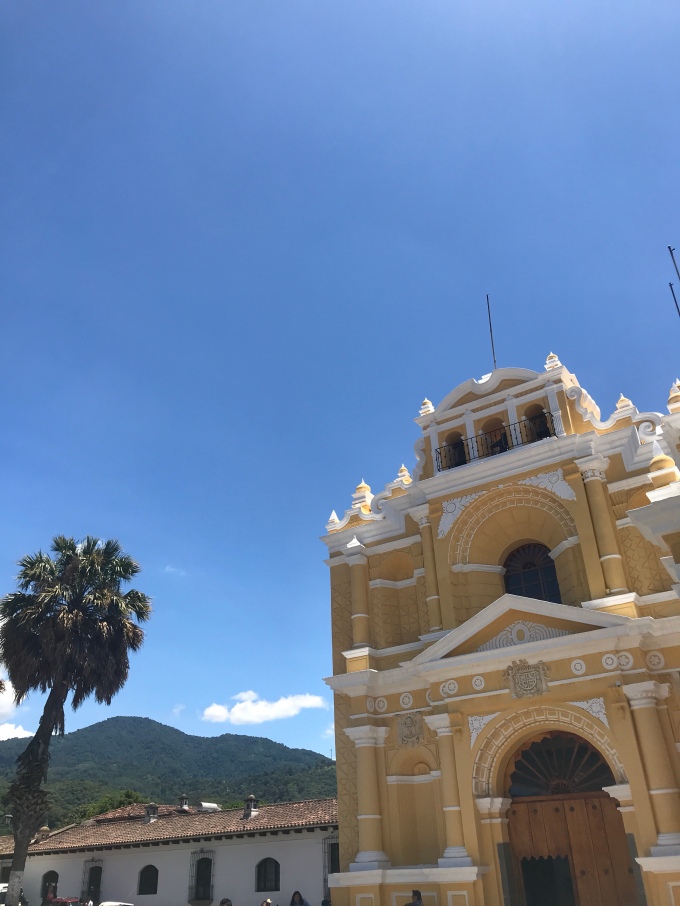 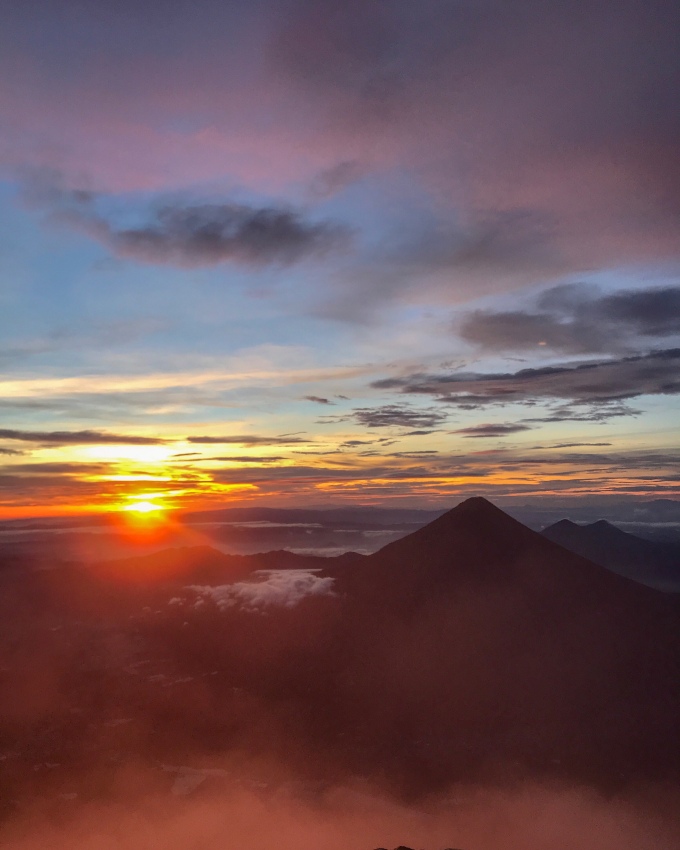 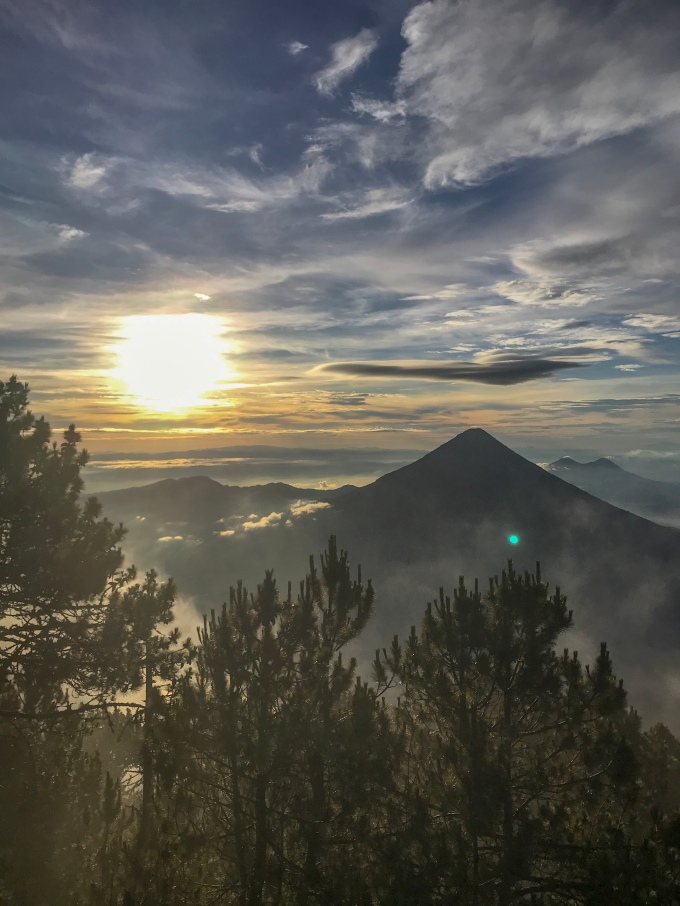 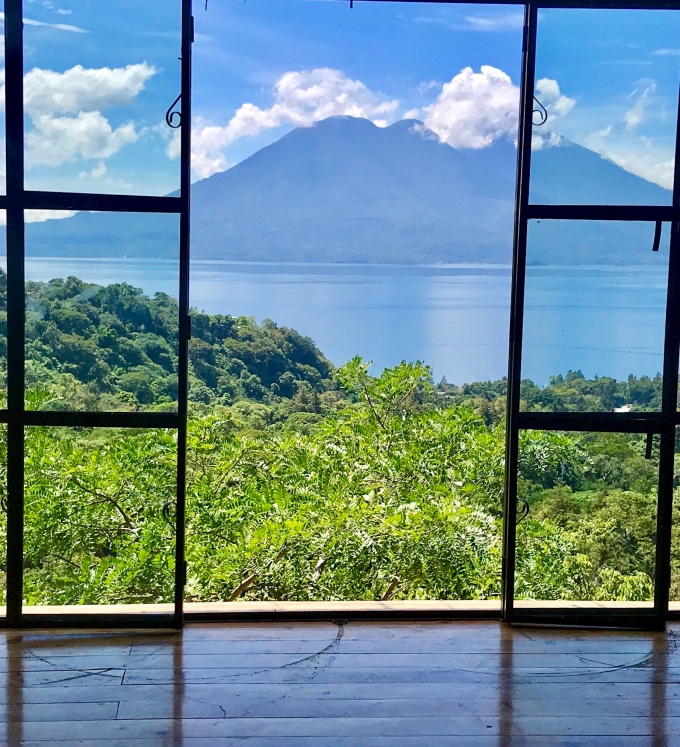 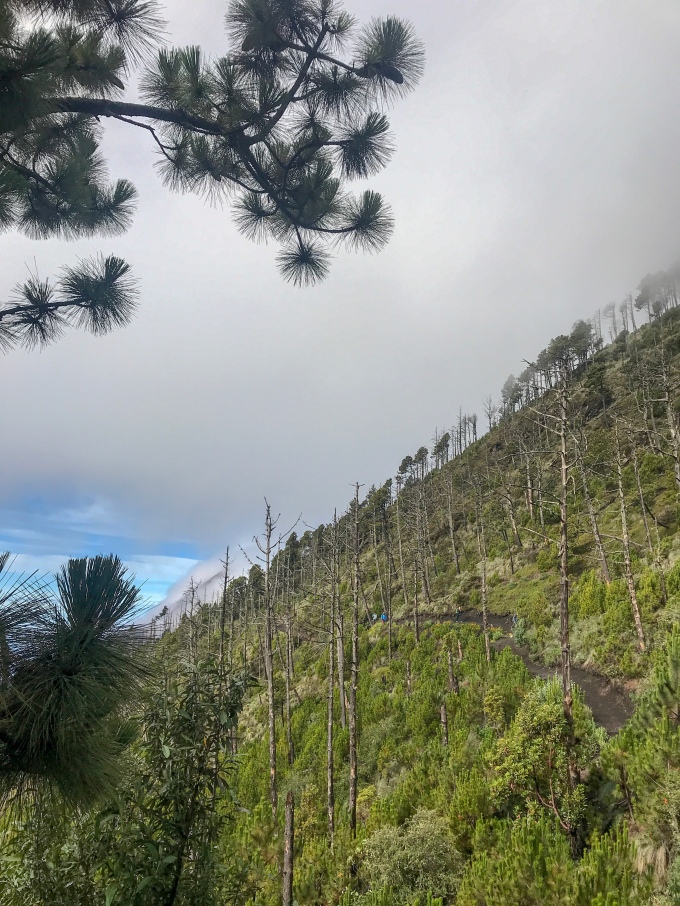 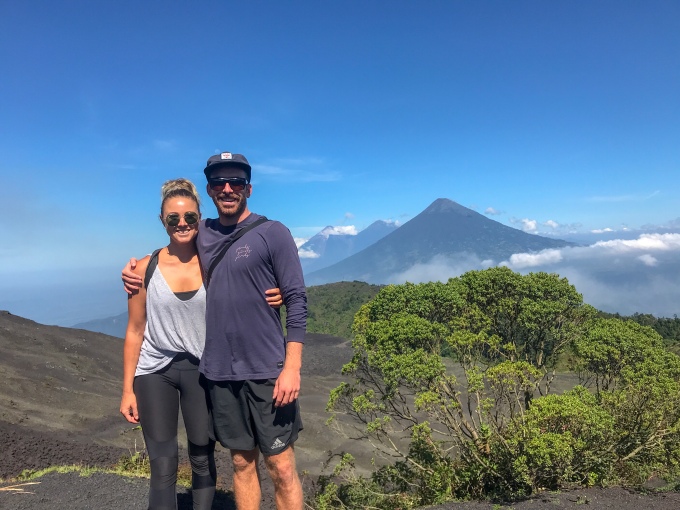 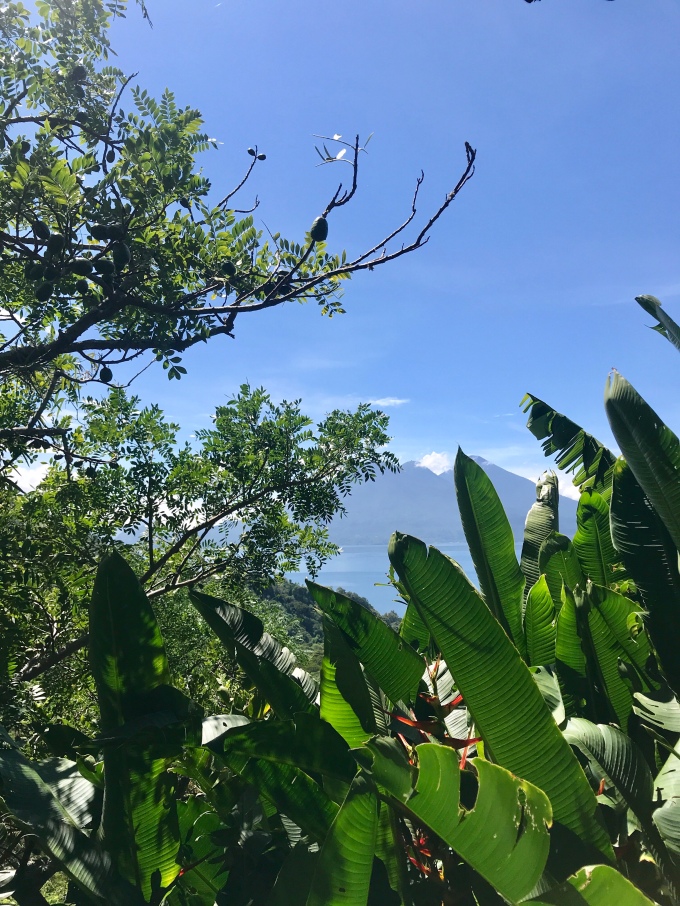 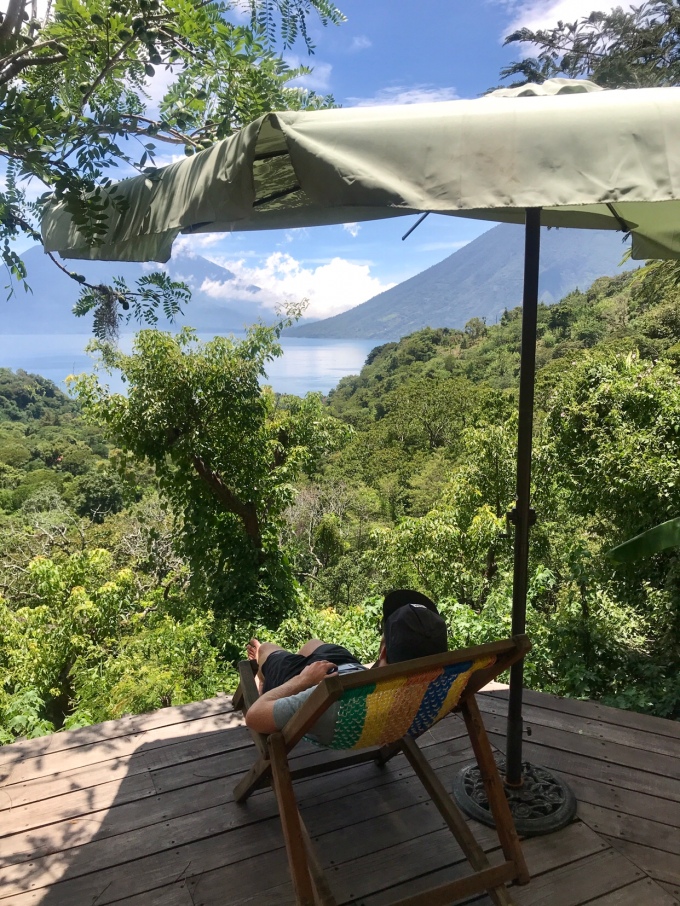 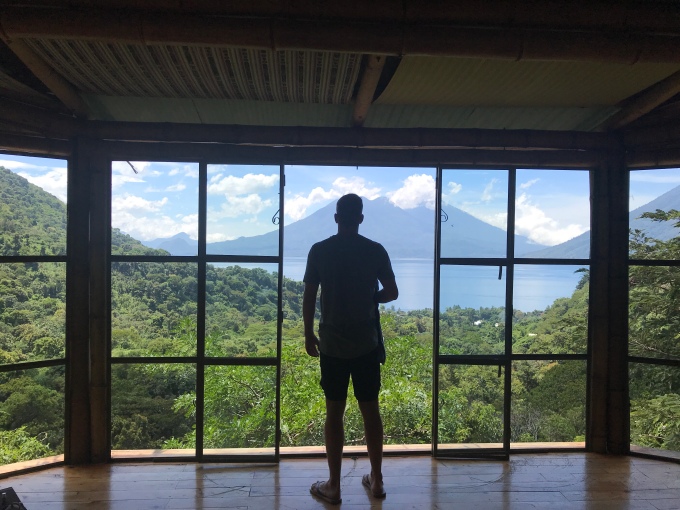